Why Do Pipes Burst? The Top 6 Causes

Burst pipes cause untold amounts of damage in homes all over Southern California. But why do pipes burst? Here are the top causes of bursting pipes and how to prevent and fix them

You may take for granted the wear and tear that the pipes laid out beneath your home experience every day. But when the worst comes to pass in the form of a burst pipe, it can seem all too overwhelming. Water damage is a hazard to your health, as well as to your wallet. But why do pipes burst?

What do you do after a pipe bursts? How can you prevent water damage in your home?

Why Do Pipes Burst? 6 Causes

Pipes are susceptible to bursting due to several reasons. We'll explain the top reasons and some preventative measures you can take to ensure your pipes don't burst.

When the water inside a pipe freezes, it expands and can cause the pipe to burst. This is a common problem in areas with colder winters. The pressure caused by the frozen water can be enough to break even copper or steel pipes.

Another factor contributing to pipe bursts in cold weather is if the pipes are in an unheated area of a home, like your crawl space or attic. In these areas, the temperature can drop significantly, causing the water inside the pipes to freeze more quickly.

If these pipes don’t have proper insulation, they can lose heat more quickly, increasing the risk of them freezing and bursting.

How To Prevent Pipes From Freezing

To prevent pipes from freezing, insulating pipes in unheated areas is essential. Think of the attic or crawl space. You should also keep the indoor temperature at a consistent level above freezing.

Letting a faucet trickle can help. You may have even tried it a few times. The idea is that the trickle keeps enough flow to prevent water from freezing solid in the pipes.

Over time, the inside of a pipe can corrode, weaken, and eventually burst. Corrosion is more likely in pipes made of materials susceptible to rust, such as iron or steel.

Corrosion is a natural process that occurs when water and other elements like oxygen and minerals meet exposed pipes. Over time, these elements can weaken the structural integrity of the pipes, making them more susceptible to bursting.

One type of corrosion that can cause pipes to burst is ‘pitting corrosion.’

Pitting corrosion occurs when tiny holes, or "pits," form on the surface of the pipe, weakening it and making it more prone to failure. Pitting corrosion is particularly dangerous because it can happen quickly and can be difficult to detect until you have extensive water damage in your home.

Another type of corrosion that can cause pipes to burst is corrosion under insulation (CUI). CUI occurs when insulation on a pipe becomes wet and stays wet, allowing corrosion to occur underneath. The corrosion can eat away at the pipe over time, weakening it and making it more prone to bursting.

Corrosion can lead to the formation of rust inside the pipe, which makes it harder to flow the fluids. This rust leads to a build-up of pressure, which can cause the pipe to rupture.

Using corrosion-resistant materials, such as plastic or stainless steel, can also help to prevent corrosion and extend the life of pipes.

Pipes that are not properly installed or made of materials unsuitable for the pressure of the water flowing through them can burst.

High water pressure can cause pipes to burst, putting extra stress on them. Water flows through a pipe and creates pressure on the pipe's walls. You measure the pressure in a pipe in pounds per square inch (psi).

If the water pressure in the pipes is too high, it can cause them to expand and contract, leading to cracking, leaking, and bursting.

The water pressure inside the pipe can be high due to a problem with the municipal pressure system or malfunctioning pressure-reducing valves.

Checking Water Pressure In Your Home

It's important to keep your water pressure in the safe range, typically between 40 and 60 psi for most households.

You can check this with a special gauge. If you suspect that you have high water pressure, it's best to have a plumber check it out and make any necessary adjustments to bring it within a safe range.

Debris, like hair, food scraps, or mineral buildup, can clog pipes, causing pressure to build up and eventually causing a pipe to burst.

As the pressure builds up, it can cause the pipe to expand and put extra stress on the walls of the pipe. If the pressure becomes too high, you’re left with a burst pipe in your kitchen or bathroom.

If the blockage or clog is from a buildup of materials such as mineral deposits or rust, it can cause the pipe to corrode and weaken, making it more likely to cause water damage.

Blockages and clogs can also cause leaks in pipes. If a pipe is weakened or has a small crack, a backup or clog can put extra stress on the pipe, causing the crack to widen and create a problematic leak.

How Do Clogs Happen?

Clogs can occur for various reasons. Common causes include buildups of mineral deposits, debris, waste materials, or tree roots growing into the pipe. It's vital to ensure you properly dispose of waste and use proper filters to prevent such blockages. It pays to be observant of your home’s surroundings.

Regular maintenance checks on your pipes can also help prevent blockages and clogs from forming, reducing the risk of bursts and leaks.

If the ground beneath a pipe shifts or settles, it can likely cause the pipe to crack or break.

Ground movement and settling can cause pipes to burst because it can stress the pipelines more. When the ground around a pipe moves or settles, it can cause the pipe to shift or bend, which can put extra stress on the walls of the pipe.

If the ground movement or settling is severe enough, it can cause the pipe to crack or break.

If the ground movement or settling causes the pipe to become misaligned, it can put extra stress on the joints between the pipes.

Settlement can happen for several reasons, such as soil erosion, changes in groundwater levels, or poor installation of pipes that result in the pipe being exposed to excessive loads or settlement.

Pipes made of materials like PVC are more flexible than metal pipes and less likely to break or crack during ground movement and settling. But they can still be damaged by the movement and create leaks.

Ground movement can happen from various natural causes such as earthquakes, landslides, or shifting soil.

Human activities such as construction, mining, or drilling are also common causes of ground movement.

The age of pipes can increase the risk of a burst because they can become weaker and more susceptible to damage as they age. Over time, pipes can corrode, rust, and become clogged with mineral deposits, weakening them and making them more likely to burst.

Older pipes may also develop leaks over time, which can lead to bursts if not fixed. As pipes age, the joint between the pipes can start to degrade and become loose. This can cause leaks and also make the pipes more prone to bursting.

Furthermore, the material that makes up the pipes determines how long they will last. Some materials like cast iron, steel, and lead pipes have a limited lifespan and are more likely to burst as they age. More modern materials, such as PVC, CPVC, and copper pipes, last longer and may reduce the risk of bursts.

The age of a pipe can also be a factor in how much pressure it can safely handle. As pipes age, they may become less able to withstand the pressure of the water flowing through them, which increases the risk of a burst.

It's essential to keep an eye on the age of your pipes and have them checked regularly. If you have an older home, consider getting a professional to check the pipes for any issues and consider if any replacements are needed.

Southern California is less prone to freezing temperatures than other parts of the country. Hence, this region's focus on burst pipe prevention is slightly different than in colder climates.

Here are some preventative measures you can take in Southern California to avoid pipe leaks and bursts.

Leaking pipes are a common cause of burst pipes. Make sure to have any leaks in your home's plumbing fixed as soon as possible to prevent water damage in your home and the possibility of a burst pipe.

Even though the weather in Southern California is generally warm, pipes in unheated areas such as the attic or garage can still be at risk of bursting. Insulating these pipes can help keep them from getting too cold and potentially bursting.

Be Mindful Of The Water Pressure

Pipes subjected to high water pressure can be at a higher risk of bursting. Make sure the water pressure in your home is at a safe and appropriate level, and consider installing a pressure-reducing valve if needed.

Over time, pipes can become corroded and weakened, making them more prone to bursting. Periodically inspecting your pipes can help you identify and fix potential issues before they become serious problems.

Be Prepared For An Emergency

Have emergency contact numbers on hand for your plumber and your utility company's emergency line in case you need to report a burst pipe.

Also, remember that natural disasters like earthquakes or wildfires could cause a cut-off in the water supply. If you live in an area with high risk, have a plan and an alternative water supply source.

If not well maintained, your water heater could be a leading cause of pipe burst. Ensure that you have it inspected and serviced at least once a year

It's a good idea to have your home's plumbing inspected by a professional plumber regularly to ensure that everything is in good working condition and to identify and address any potential issues before they become bigger problems.

Whether it's an unexpected ceiling leak or damage to your walls or floors, get in touch with Murrieta water damage repair professionals that will help drain water, scour your home for mold, and help point you in the right direction. We’ll help you quickly and efficiently.

For more information on how to repair and protect your home from all manner of damage and hazards, call Five Star Restoration today!

questions about your restoration project?

If you are not sure your location is in the areas we cover, or if you'd just like to chat or ask a question, give us a call.

Thank you! Your submission has been received!
Oops! Something went wrong while submitting the form. 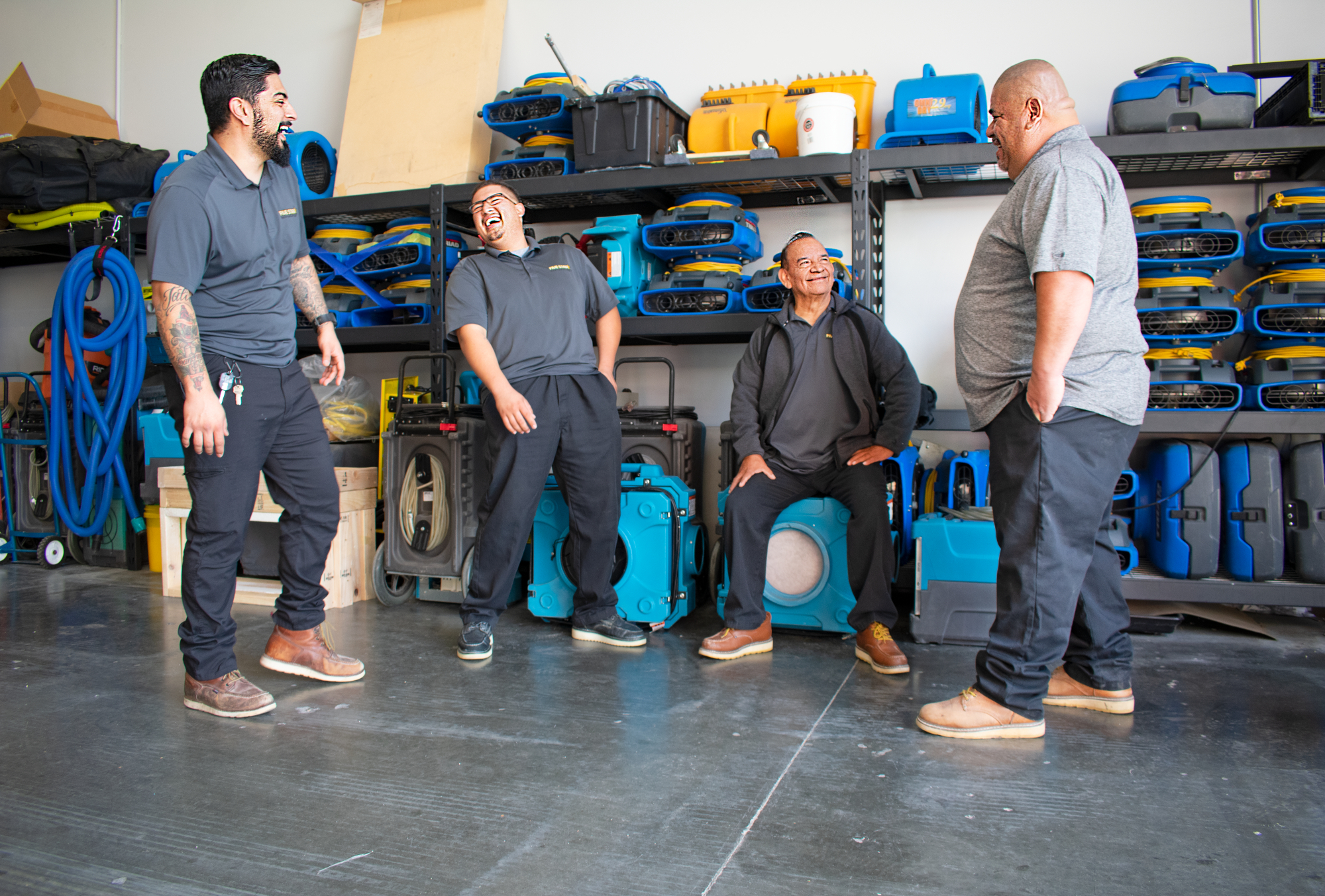 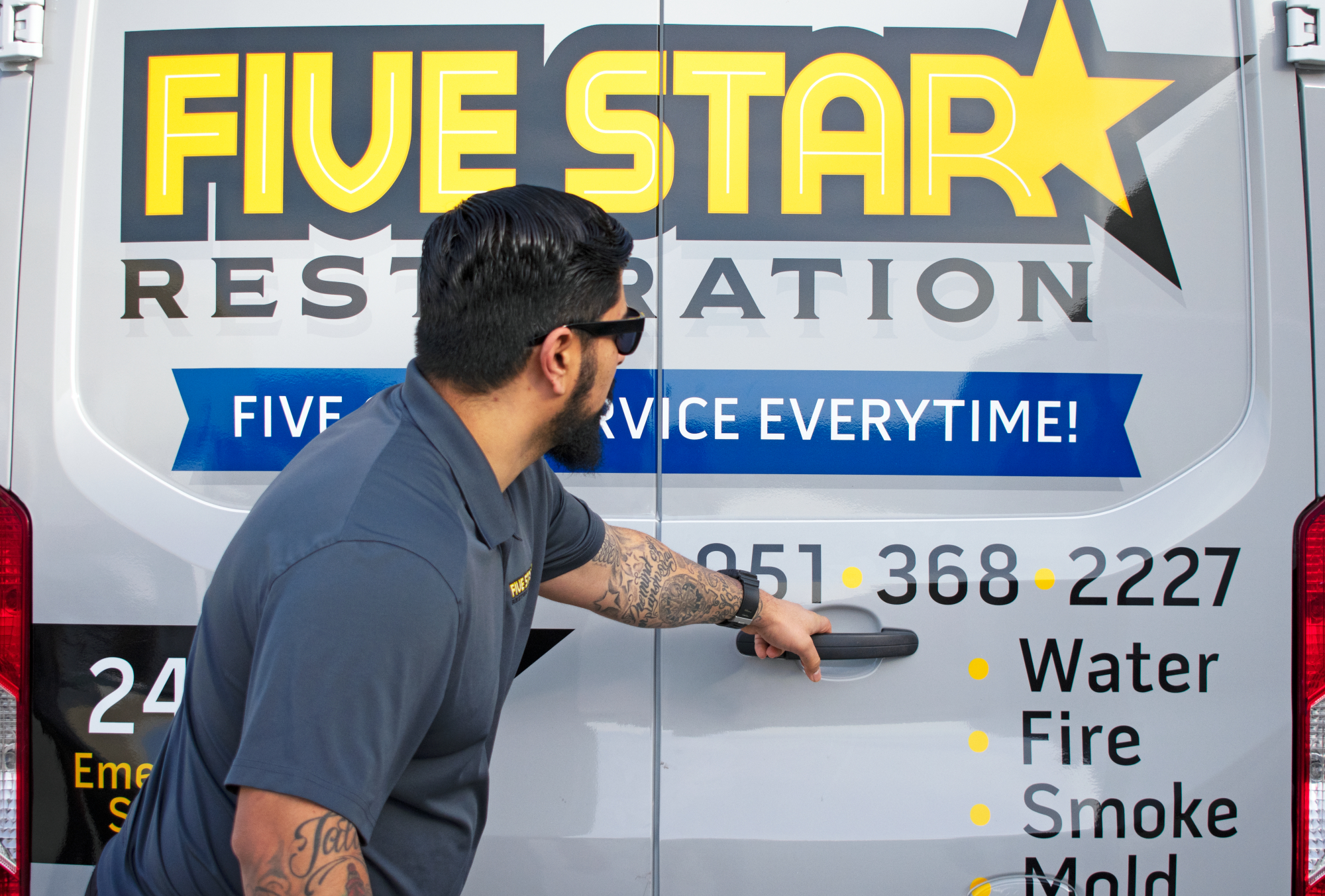 We are committed to an excellent finished product and even better customer service. Rest assured that when we show up for your restoration needs, you'll be informed, confident and stress-free.